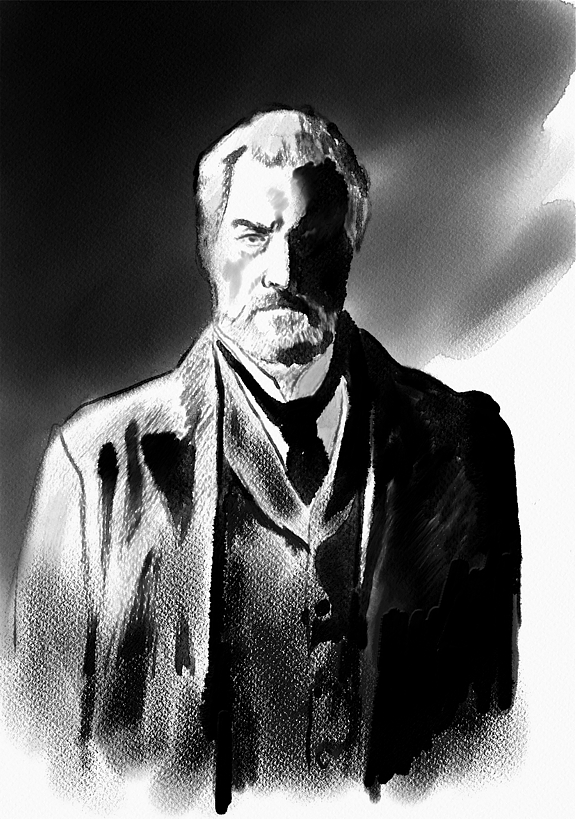 One final Inktober piece, done in a new painting program I’ve been experimenting with called Rebelle.  It provides natural media style tools that rival those of Corel Painter.  Still getting used to it, but I think it’s going to be a very useful tool.

I’ve never been a fan of Timothy Dalton, but I thought his performance as Sir Malcom Murray was excellent.  And this character is a fine example of the way series creator and main writer John Logan finds inventive ways to re-tool the elements of his Victorian source material.  Rather than do the obvious thing, and haul in Professor Van Helsing as the leader of this misfit band who oppose these supernatural horrors, Logan turns to a character who naturally must have existed, but is never mentioned in Stoker’s Dracula – that of the father of Mina Murray Harker, the heroine of the novel.  His absence from the original story Logan explains by making him an explorer and adventurer, probably modeled loosely on Sir Richard Francis Burton.

I find this particularly admirable because with a single character decision (“Make him an explorer/adventurer a la Burton, Speke, Livingstone, and their like”), Logan solves several problems at once;  he provides a reason for Sir Malcom’s absence during Mina’s ordeal and kidnapping, and for the guilt about that which drives the man, and it provides the kind of background and experience which prepares him for each aspect of the pursuit of Dracula; for the violence of it, the acceptance of the supernatural aspect of his quest (he’s seen such things in his travels), and the obsessiveness required to follow through on what would appear to be a Herculean task.