Posted on October 1, 2021 by Duncan Eagleson 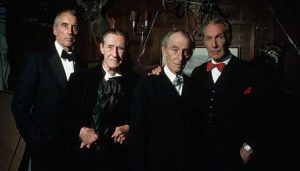 This was the last film that Peter Cushing and Christopher Lee appeared in together, so of course I had to check it out. I’ve never seen or read Seven Keys to Baldpate, the George Cohan play this movie is based on (nor have I read the Earl Derr Biggers novel the play was based on), so I have no idea how faithful it is to the source material, but it’s a mildly amusing horror comedy. A writer (Desi Arnez Jr. as Kenneth Magee) makes a bet with his publisher (Richard Todd as Sam Allyson) that he can write and old style gothic novel in 24 hours. I order to do so, he’s going to spend the night in Baldpate Manor, an old house in Wales that’s supposedly cursed, and has been empty for 40 years. But as he’s attempting to work, one strange character after another shows up to interrupt him, each apparently having a key to the house (hence, the original title).

The premise, as stated, is ridiculous, of course. In the original play (according to Wikipedia) the bet is for the writer to create a 10,000 word novella. This seems like an achievable goal, though the result would be a very rough first draft, not a finished novella. But a full novel in 24 hours? Even in the ’70s, when the movie was made, and when novels were generally shorter (an average of 60,000 to 70,000 words, and even assuming the writer was one of those pulp writers from the ’30s and ’40s, who cranked out a novel in a few days, a full novel in a single night seems like the first joke in this comedy.

The second joke is the cast. They seem to have hauled in every famous male horror star they could to play the various weird folks who turn up to prevent the Arnez/Magee from completing his manuscript: John Carradine, Peter Cushing, Vincent Price, Christopher Lee. Unfortunately, the great cast is not well used. The scares never really scare, and the comedy never really becomes all that funny.

And why is the front of a manor house with no electricity apparently lit by floodlights?

At the end, there’s and O. Henry twist (or a Night Shamalyan twist), followed hard by a second twist.

The first to show up are Carradine and Shiela Keith, pretending to be the caretakers, but who are actually the original owner, Lord Grisbane, and his daughter Victoria. Next comes Magee’s editor’s secretary, Mary Norton (Julie Peasgood), at first pretending to be a secret agent warning Magee against a threat on his life. Then there’s two more men who show up (Cushing, and Price), who turn out to be Lord Grisbane’s sons. It’s a family reunion in the manor before it gets sold off. Christopher Lee shows up as Corrigan, who claims he’s bought the mansion, intending to raze it and sell the land off for development. He grudgingly assents to the Grisbane’s pleas to allow them to have their reunion, but why he should remain for the night is unclear, and makes little sense. Finally, a pair of young newlyweds who’ve gotten lost show up seeking shelter from the storm.

It quickly becomes evident that there was a family tragedy and scandal which split he family up, sending them all away to the ends of the earth. The missing brother, Roderick, was responsible. But wait, it then develops that brother Roderick Grisbane is supposed to have been locked in his room for 40 years? How is he supposed to have survived? Eating wallpaper paste and drinking rainwater? Turns out Victoria has been bringing him food the whole time. But the room Roderick was imprisoned in turns out to be empty. And the Grisbanes start getting killed off one by one. Lee/Corrigan turns out to be Roderick Grisbane, the black sheep brother who caused the family’s downfall, though it’s not clear why none of the other Grisbanes recognize him.

Except of course, in the end, the whole thing turns out to be a put-up job. The Grisbanes (and the young couple who arrive seeking shelter from the storm and get murdered) are all actors, hired by the publisher to disrupt Magee’s writing process, and teach him a lesson. In the aftermath, they all gather to drink champagne, and there’s this little exchange between Magee and his publisher:

Magee: “You really are a bastard, you know.”
Allysoon: “Well, I’m a publisher. What did you expect?”

But then, wait – now the second twist comes in. None of this actually happened, it’s all the story of the novel Magee has spent the night writing. I have to assume they went for this second twist because if you were paying attention, the first one is actually pretty obvious.