Dracula gets the Sherlock treatment

Posted on October 6, 2021 by Duncan Eagleson 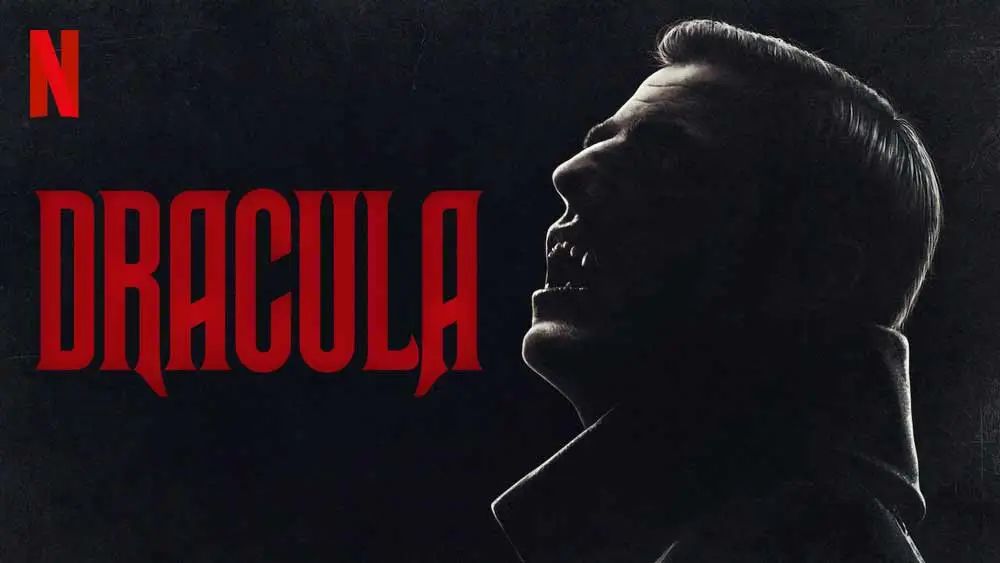 Gatiss & Moffat promised they were NOT going to do an updated modern version of Dracula, like they did with Sherlock. They lied. Within a few episodes, we’re in today’s world.

The opening was very promising. They were ringing some original changes on Stoker’s novel, and there are some interesting ideas, but in the end, it turns into a hot mess. Gatiss & Moffat as usual are so busy showing off how clever they are that they lose sight of their story, and it becomes all flash and little substance. And Moffat’s usual misogyny and inability to follow through on big setups is on full display here.

It’s not like there’s nothing to like in this film. It’s a high quality production, and the actors are generally excellent.  Though it’s a new and different take on the Dracula story, it’s also replete with visual references to earlier versions. At various points, Claes Bang as Count Dracula is dressed like Bela Lugosi, complete with the ribboned medal Lugosi wore with his white tie and tails, and later in Sir Christopher Lee’s black suit and cape. In the opening scenes, although he doesn’t have the elaborate hairdo, he strongly resembles Gary Oldman’s old Dracula, and in many later scenes, Bang’s appearance and performance is reminiscent  of Louis Jourdan’s earlier BBC outing in one of the most authentic versions of Stoker’s tale.  The location shots of Dracula’s castle are at Orava Castlein Slovakia, which played the same role in 1922’s Nosferatu.  Many interiors were shot at Bray Studios, home to Chris Lee’s Hammer Dracula films of the ’60s and ’70s.  About the only major Dracula film I didn’t notice a visual shout-out to was Langella’s uber-camp version, based on his successful Broadway play. Which is odd, since they’re indulging in a lot of camp themselves.

But the series doesn’t quite know if it wants to be a serious vampire story or a comedy. Even in the period scenes, Dracula’s lines are full of puns and jokes. Be that as it may, much of the period material is reasonably solid. With the first two hours devoted to the opening of Stoker’s novel, from Harker’s (John Heffernan) ordeal in Transylvania to Dracula’s voyage to England on the Demeter, we’re led to expect a long and in-depth revision of the novel, probably extending to eight or so episodes. However, it all collapses into farce in the third concluding episode.

The third episode brings Dracula to England in the modern world, and it’s a pathetic mess with only the occasional bright spot. Dracula’s played as the usual time traveling fish out of water, and it’s in this final episode that the female characters really get short shrift. They’ve already dismissed Mina Harker (Morfydd Clark), the heart and soul and real hero of Stoker’s novel, as a screaming flibbertygibbet victim, and now their female version of Van Helsing (Dolly Wells) is surprisingly ineffective despite her spunky “strong woman” dialogue. Lucy Westenra (Lydia West) gets portrayed as a shallow, selfish narcissist who fully deserves her hideous fate. And Dracula, who despite his James Bond quips and jolly demeanor has been portrayed throughout as the ultimate monster, becomes a self-sacrificing hero at the end, a conversion that’s in no way earned by previous character development. 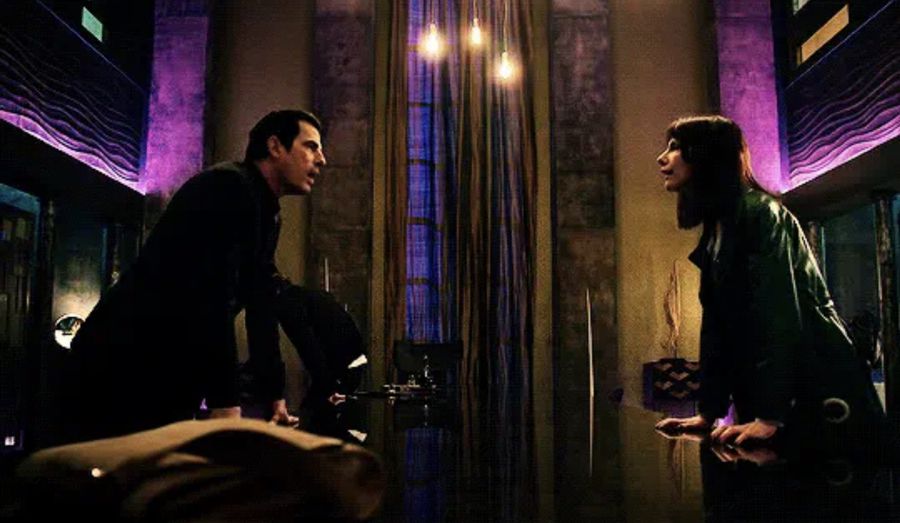 Claes Bang as Dracula and Dolly Wells as Zoe Van Helsing. This final confrontation is a callback to that of Hammer’s Dracula, where Cushing’s Van Helsing and Lee’s Dracula face off over a long refectory able, and Van Helsing ends up pulling down the curtains to let in the sunlight. (BBC/Netflix)

If they’d continued as they started, going for eight or so episodes and playing out the rest of the novel to the extent and at the pace they played out the opening, even with the shift to modern times, this could have been the definitive Dracula for this generation. Instead, they squandered that whole extended setup on a quick breeze though a modern version of the Lucy scenario, with a couple of tropes culled from the later (and worst) Hammer/Lee Draculas and Wes Craven’s Dracula 2000, with a bunch of self-indulgent “aren’t we clever” moments tossed in. 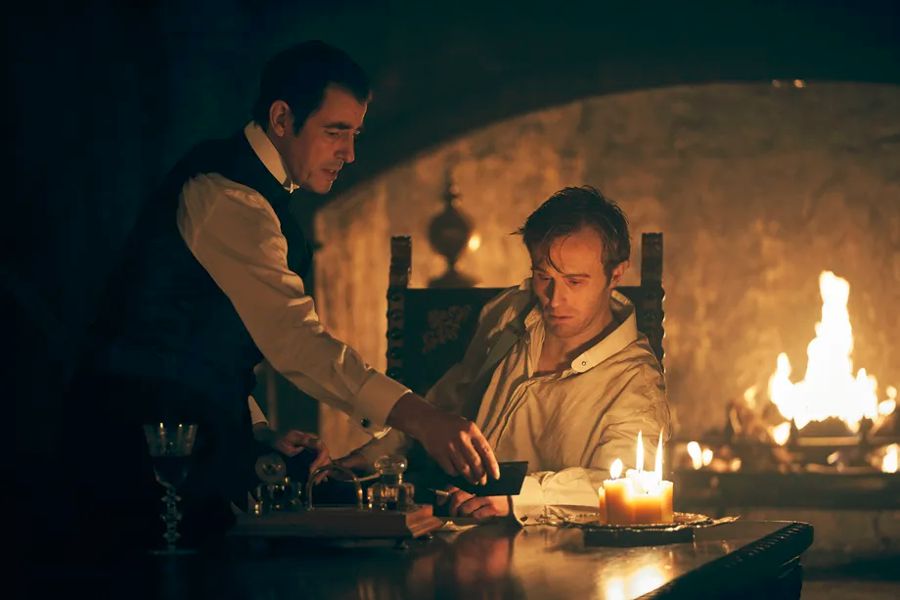 We begin with Jonathan Harker’s ordeal, which to a large extent, mirrors his ordeal in the book, though with considerable elaborations and variations. Much of the sense of this section of the series is true to what Stoker created. By the end of the first episode, however, we’ve left Stoker far behind, with Dracula attacking the convent in which Jonathan Harker is recuperating after escaping the castle. Harker himself has now become some sort of vampire, or at least some form of undead. And Van Helsing has already shown up, as a nun in the convent, questioning Harker about his ordeal. She seems to know all about Dracula already, and realizes he’s not just your average vampire. 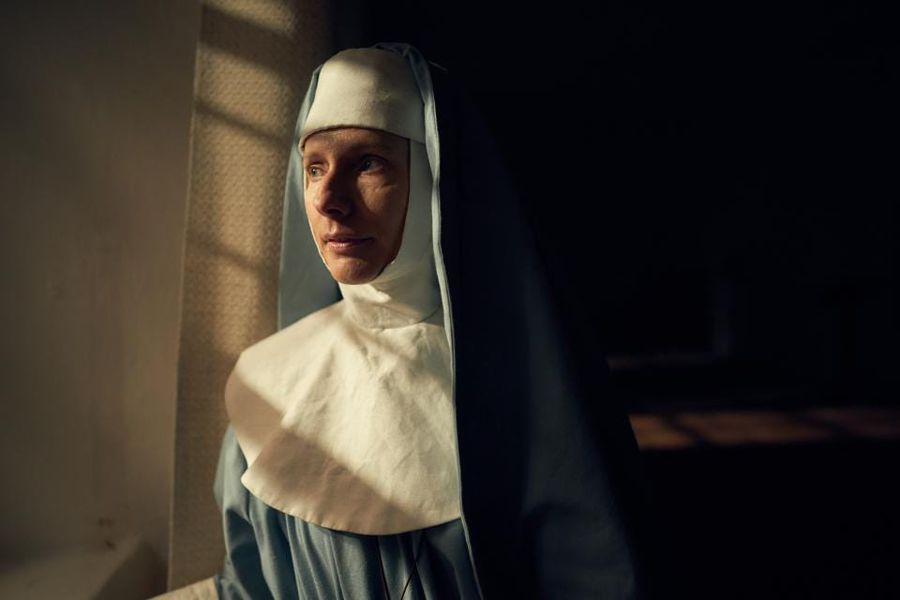 I have less issue with changing Van Helsing’s gender than with making her already an expert on vampires in general, and Dracula in particular. Stoker’s Helsing is not a vampire hunter to begin with – he’s a doctor who specializes in diseases of the blood, and he comes to the conclusion that Lucy has fallen victim to a vampire only reluctantly, after he’s eliminated other possibilities. He has to go off and study up on vampirism in order to deal with it, and when he puts together that the vampire is Dracula, has to consult with a professor from Budapest to find out who Dracula was/is. Making Van Helsing a pre-existing expert vampire hunter is one of the annoying tropes I’ve hated about a lot of Dracula adaptations, because it changes the whole dynamic of the story. In Stoker’s novel, we have a couple of modern scientists (Seward and Van Helsing) who are reluctantly grappling with the sudden appearance in their logical, rational world of an ancient supernatural evil. Stoker’s book is awash in what was at the time modernity – bleeding edge technology like typewriters, bicycles, gramophones, telegraph, telephone, social change and the “modern woman.” Our heroes defeat Dracula partly by their use of science and modern technology, things Dracula has little understanding of. They piece things together from newspaper articles and official reports, and leverage the paper trail Dracula does not realize he’s leaving – bills of lading, shipping records, schedules.

Here, exactly the reverse becomes true. Thrust into the modern world, although he starts out clueless and confused, Dracula quickly adapts, and it’s his opponents who are wrong-footed as he skypes with his lawyer, and draws his victims by texting them.

Admittedly, by the end of the second episode, I was feeling like they’d have been better off setting this whole story in more contemporary times after all. The aesthetic they were going for, and the dramatic dynamics would have worked better in modern times than in the Victorian period. Little did I know they were about to bring it into today’s world. Unfortunately, despite some interesting twists, it doesn’t really work, and Moffat’s famous misogyny is on full display, despite the attempt to make the Van Helsing women (Agatha in Victorian times, Zoe in modern day, both played by Wells) the heroes of the tale.

Dracula’s voyage to England on the Demeter is considerably expanded on. In the novel, there is no mention of passengers, the Count traveling secretly, his body ensconced in the “boxes of earth” being shipped to England. Here. there are a number of high society passengers, among whom Dracula moves and socializes.

The confrontations on the Demeter become the pivotal moment in the revised story Gatiss & Moffat are telling.

And, bang, in the next episode, we’re in modern times.

This could have been an exciting updating of Stoker’s novel. Instead, we got a solid beginning that devolved into a self-indulgent mess, with Gatiss and Moffat congratulating themselves on how fucking clever they are.  The unfortunate tendencies that ruined Sherlock also ruined their Dracula, which is a shame, because like Sherlock, it started with great promise, but ultimately failed because they were too seduced by their own cleverness.

This entry was posted in Dracula, Horror, Movies & TV. Bookmark the permalink.