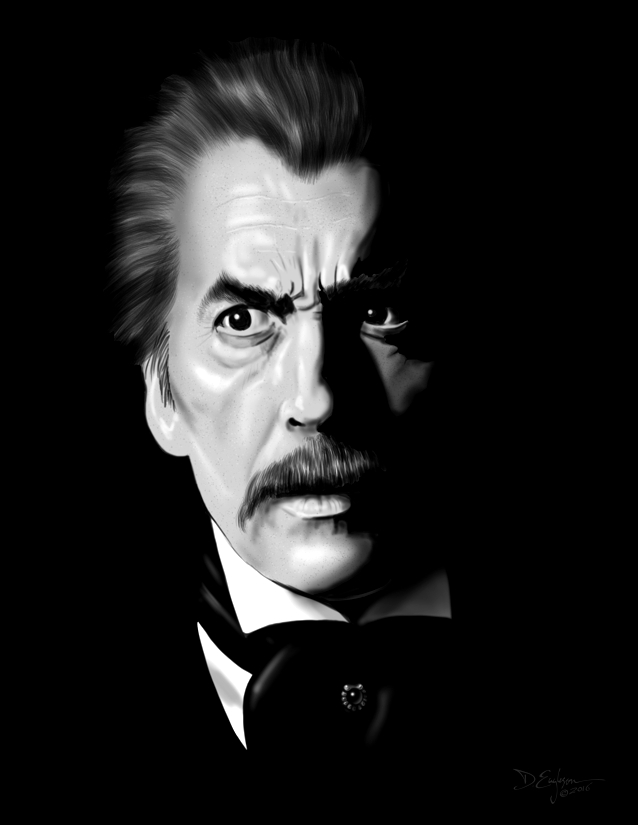 Later generations would come to know Sir Christopher Lee as Saruman the White in The Lord of the Rings, and Count Dooku in Star Wars.  But Lee made his name originally playing Count Dracula.

Bela Lugosi established a standard for the interpretation of Dracula for the 30s and 40s, but at the end of the 1950s, Hammer Studios brought a new vision of Dracula to the public in the person of Christopher Lee with their groundbreaking version of Dracula (called Horror of Dracula in America for copyright reasons).  It was the first Dracula film to show blood (in Technicolor), fangs, and staking, and a Dracula who moved any faster than a snail on quaaludes. Lee’s approach to Dracula was far closer to the character as presented in Bram Stoker’s original novel than had ever been seen before.

Lee would go on to play Dracula for Hammer in seven more films through the 60s and 70s, and he grew to hate it more with every sequel.  He had great affection for the original novel, and always wanted to play the part in an authentic and faithful version, but Hammer had other ideas. The studio wanted to update the Count for the “mod’ generation.  People have wondered why in some of the later films, Dracula had no lines.  Turns out he’d had lines in the original scripts, but the writing was so abysmally bad, Lee refused to say the lines, and instead went through the whole film without speaking.  It says something about Lee’s popularity, how firmly he’d become identified with the part in the public’s mind, that the studio let him get away with this.

The picture here is from an indie production Lee did as a labor of love.  1978’s Count Dracula (El Conde Dracula) was intended to be a faithful rendition of the book, which was why Lee signed on.  Good intentions went downhill fast, and though the opening scenes are taken from Stoker, after that, the film becomes an incoherent mess.  But at least Lee got to do the appropriate costume and makeup, and play some of the film “right.”

As Karloff and Lugosi had dominated the horror films of the 30s and 40s, Lee, Peter Cushing (and arguably Vincent Price) would dominate the genre in the 60s and 70s.  Lee and Cushing would appear together in 22 films, primarily from Hammer and Amicus, and if the quality of the scripts was not always sterling, their performances never fail to entertain.