Recently, I’ve been getting spam – the Chinese equivalent of the famous Nigerian bank scam, where someone has left me a gazillion dollars, and all I have to do to receive it is give the scammers access to my bank account.  These emails come from someone named “Hong Wu”.  The name seemed to ring a bell somewhere in the back of my brain, and after I’d received several of them, I heard a voice in my head saying “Marks of the Hong Wu?  That is a vexed question.”

Ah, yes, then I remembered… that was Edward Hardwicke’s voice, from the Granada Sherlock Holmes episode “The Illustrious Clent”, wherein Holmes (Jeremy Brett) sends Watson (Hardwicke) disguised as a collector of rare Chinese pottery to draw the villain, Baron Gruner (Anthony Valentine), away from his study, while Holmes searches it for evidence.  Thanks to the client of the title, Holmes has sent Watson along with an actual piece of Ming pottery to intrigue the villain.  In the film, the Baron becomes suspicious, and questions Watson on several obscure points about pottery. Watson’s done some boning up, of course, but  couple of days of study does not a true expert make.  Still, he’s doing pretty well, holding his own, until the Baron asks his opinion about “the marks of the Hong Wu.”  When Watson, confused by this, temporizes, calling it a “vexed question,” Gruner replies, “I should think so.  There are no marks on the Hong Wu,” and Watson’s imposture is discovered.

“Marks of the Hung Wu? that’s a vexed question.”

Curious now, I checked Wikipedia to discover that Hong Wu (aka Hungwu, given name Zhu Yuanzhang, 1368–1398) was the founder and first emperor of the Ming Dynasty of China. His era name, Hongwu, means “great military power”. 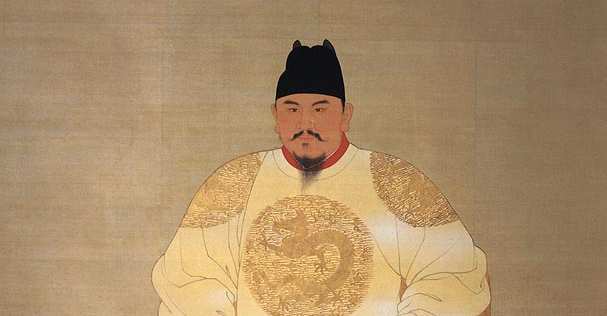 Why a long dead Chinese emperor would need to run the modern equivalent of the old Spanish Prisoner con is, paraphrasing Watson, a vexed question.  I suppose the Communists have probably confiscated whatever monies he had stashed away all those years ago.  I hate to tell him he made a bad choice sending his email to me – even if I weren’t wise to the con, there’s hardly enough money in my bank account these days to make it worth his pilfering it.