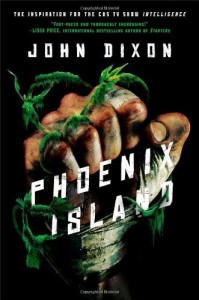 Much has been made of the fact that this book is the inspiraton for the CBS series Intelligence (and more power to John Dixon for it). However, be warned, Hollywood being what it is, Gabriel of Intelligence bears only a passing resemblance to Carl of Phoenix Isand. Not that they’re not recognizably related – the protagonist of Phoenix Island could easily have become the main character of Intelligence in a decade or so of living. But if this is a prequel (or Intelligence is a sequel), they take place in alternate realities.

That said, Phoenix Island is well worth the read, whether you’re a fan of the show, or have never seen it. The book is a taut, well crafted action/adventure with touches of horror, that grips the reader (or gripped this reader, anyway) from the first page.

Carl, the young protagonist, is the quiet badass orphan in his late teens, a bundle of fury in the boxing ring, who otherwise keeps himself to himself, and keeps his head down. However, injustices witnessed on a personal level bring that fury to the surface, and his reactions to such incidents bring his fighting skills and physical power into play, uncontrolled by any reason or judgement. Unsurprisngly, this tendency puts him into the hands of the law, and then into a reform school/juvie. The place he’s sent, however, is more than a little unorthodox, and to survive the place, he’ll have to learn to master himself. In that sense, Phoenix Island is a coming of age tale. It is not, however, a YA novel (though YA readers might well enjoy it).

The action is nonstop, and well delivered. It’s clear Dixon is a boxer himself, and has an enthusiasm for the martial arts generally. He knows enough not to bog us down in elaborately clinical descriptions of a fight, but includes just enough tactical and strategic details to be absolutely convincing, hitting the important points hard, and letting the less important give and take glance off us. Anyone who has ever stepped into a ring or onto the dojo mats will recognize the authenticity of his descriptions. Myself, I’ve always been of the opinion that authenticity comes through, even for those who don’t have personal experience or knowledge of a particular subject. You don’t have to be an expert on Victorian history to recognize the difference between, say, a flashback episode of Dark Shadows and an episode of Masterpiece Theater. And you don’t have to have fired a pistol to intuitively pick up on the difference between a writer who knows his revolvers from his semi-automatics, and one who doesn’t. All other things being equal, authenticity communicates.

You can’t help but like Dixon’s protagonist, even as you’re shaking your head at his youthful stupidities. And because he’s not, on the whole, a stupid kid, you know he’s going to have to get past those blind spots, and quickly. Dixon pits Carl against Stark, the warden of Phoenix Island, an older and more experienced antagonist, physically more powerful, with enormous resources at his back. This forces Carl not only to find some self control and self discipline, but also a new measure of cunning. His antagonist, and his situational disadvantages, will force Carl to take what he knows of tactics and strategy on the small scale (that of a fight in the ring, in the dojo, or on the street), and apply it to the larger picture (his long term conflict with Stark).

There are a few of the usual prison/military tropes – the sadistic drill sargeant/guard, the fragile prisoner who breaks, the regular guy who gets offed – but Dixon injects each of them with his own unique flavor, and makes each seem less like a stale trope warmed over than a logical consequence of the situation (and the dreaded and inevitable Harmonica Scene is passed over qucikly, without use of an actual harmonica).

One of the great pleasures of Phoenix Island is the way it plays with the standard tropes of works like Cool Hand Luke and other prison/chain gang movies, mashed up with war stories, some Bond villain vibe, and a touch of The Hustler.   One reviewer compared it to Cool Hand Luke by way of Lord of the Flies, and I wouldn’t argue too hard with that assessment.

As you read Phoenix Island, it starts to feel familiar, and then takes a left hand turn. And keeps turning. Almost every time I thought I knew where he was going, Dixon threw me a curve ball.

In the end, it seems to me that Phoenix Island celebrates that ultimate ability we have to choose, to draw lines for ourselves, to say “No!” to unfairness, injustice, intolerance and hate, and “Yes!” to compassion, companionship, and love, whether we’re boxing and martial arts stars, or just an unfortunate schmuck who ended up in the wrong place at the wrong time. Or both.

Get Phoenix Island from: Amazon or Barnes & Noble