So I’m late to the party with this “Inktober” business – just found out about it the other day.  Choosing to jump in, I figured considering the time of year, I might as well make my Inktober creations celebrate some of my favorite horror stars. 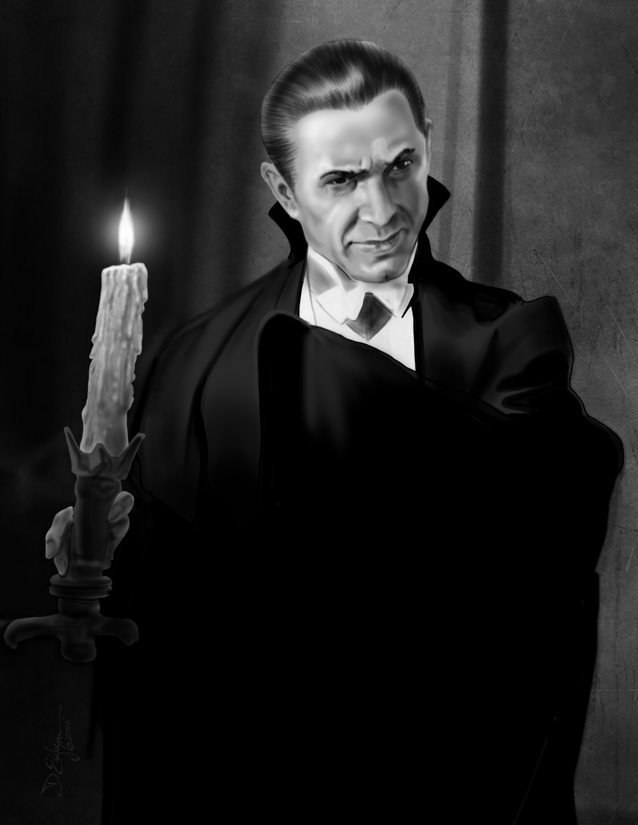 Bela Lugosi’s Dracula was the film that caught my imagination as a kid, and got me into horror to start with.  Although I have a nostalgic fondness for it, and there are a few outstanding performances, the truth is, as a film, it’s not actually all that good.  Director Todd Browning was apparently asleep at the wheel through most of it.  He let Karl Freund cut loose with his camera work in the introductory scenes in Transylvania, which are the only scenes of any real cinematographic interest – once the action moves to England, Browning plants his camera in a medium shot, and barely moves it even to intercut any closeups, so it’s a lot like watching a stage play.  In fact, the Spanish language version, filmed at night on the same sets by another crew, with Carlos Villarías as Dracula, is a much better version overall (though I think Villarías and Eduardo Arozamena in the roles of the Count and the Professor do not measure up to Lugosi’s and Van Sloan’s performances).

All that said, Lugosi’s Dracula was certainly an iconic film which created a lot of what would become the standard tropes for horror movies, and kicked off Universal Pictures’ series of horror classics in the thirties.

For the artists in the audience:  Technically, my Lugosi isn’t “ink” per se.  It was created in Photoshop, but I set myself certain rules to try to make it more like an actual ink piece:  minimal number of layers, and no using selections or masks, no layer mode changes, no level adjustments, just painting with black and white.  I broke my rules just once, putting a texture on on the background in multiply mode to give it a little more visual interest.  pretty happy with how it came out.