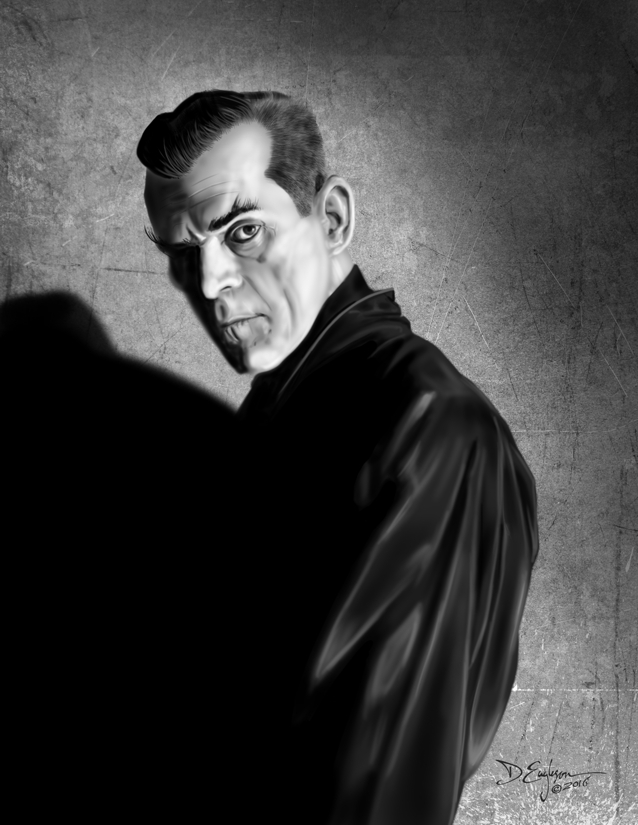 Boris Karloff is most famous, of course, for his first big role as the creature in James Whale’s 1931 Frankenstein.  In choosing a source pic of him, though, I wanted to show him with a little less makeup – his craggy face is a fascinating character study.  This shot came from one of my favorite films of his, The Black Cat, in which he co-starred with Bela Lugosi.  The film has nothing to do with the Edgar Allan Poe short story of the same name (Lugosi would later appear in another Black Cat film, loosely based on the Poe tale, in 1943, with Basil Rathbone ).  Karloff plays Hjalmar Poelzig, the leader of a Satanic cult, supposedly loosely based on Aliester Crowley.

While not a great film, the Black Cat is notable for several reasons:  this was one of the first films to pair Karloff and Lugosi together (they would work together on seven more films over the next  six years, including The Raven and Black Friday); it’s one of the few films in which Lugosi plays a hero, rather than a villain; and it’s one of the first ever films to feature a musical soundtrack throughout.

As with my Lugosi portrait, this one was created in Photoshop, using minimal layers and no effects (no selections, masks, adjustment layers, etc) except for a texture overlay on the background.

On a related note, a true story:

When I was growing up, there were no VCRs or DVDs, no cable stations, Netflix, or On-Demand.  We could only watch movies at home when the TV stations chose to air them.  Frustrated by this, I got myself a reel-to-reel tape recorder, and recorded the soundtracks of my favorite movies when they aired, so I could play them back later.  I listened to those tapes so often that I knew some of them by heart.  I can still recite large sections of the script of Lugosi’s Dracula.

The Black Cat was one of the ones I recorded.  Toward the finale of that film, Karloff as Poelzig is conducting a black mass, and gives a grand sounding invocation in Latin.  As a teenager, I memorized that Latin invocation, and recited it for my high school Latin teacher, who helped me translate it.  It turned out to be a random assemblage of cliche adages (like “Take it with a grain of salt,”  “Judge a tree by its fruit, not its leaves,” and so forth).  Not exactly the sort of thing you’d expect would entice His Satanic Majesty into a personal appearance.
Just after high school, a friend of mine was into LaVey Satanism.  He had met those ghost chasers and “exorcists” Ed and Lorraine Warren (on whom the characters in The Conjuring were based), and they wanted to attend and tape one of his rituals.  Being short on attendees, he asked me to join them, and do a piece in the ritual.  I was an aspiring actor at the time, and did it as a lark.  The joke is, the piece I did in that ritual was a Latin “invocation” I already had memorized  — Karloff’s nonsense recital from The Black Cat.  The Warrens duly taped the whole thing, and for years afterward, the tape of my sonorous recital of a bunch of Latin cliches was a feature of their lectures, presented as part of a legitimate “Satanic Ritual.”  I’ve often wondered if there wasn’t ever a Latin scholar or a film buff in one of their audience who got the joke.

The Black Cat on IMDB    Boris Karloff on Wikipedia