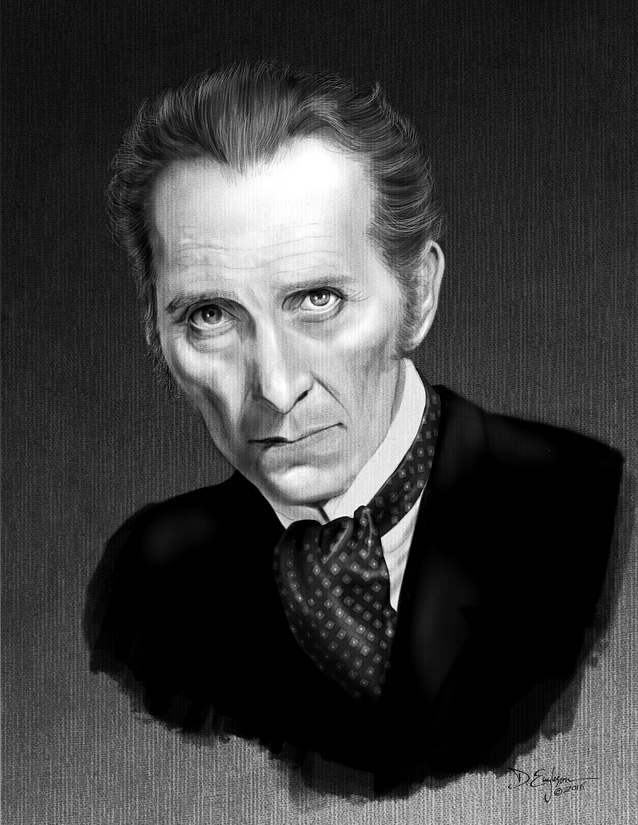 Peter Cushing was perhaps my all time favorite horror star, and a bit of a role model when I was young.  It was his performances in Hammer’s films of the 50s and 60s, as Professor Van Helsing, Sherlock Holmes, Baron Frankenstein, and others, that gave me hope that a skinny, bookish fellow could also be dynamic and admirable, and that one didn’t have to be a muscle bound hulk to be a hero (and, yes, even Baron Frankenstein seemed a to my young mind to be a hero, albeit a misguided one.  Come on, he was trying to conquer death, fercryinoutloud).

Cushing was also the un-numbered Doctor.  He starred in two Doctor Who films in the early 1960s, which apparently are not considered canon by Whovians, and his Doctor is not considered an official incarnation.  In later years, he would become known to new fans as Grand Moff Tarkin, the creator of Darth Vader in the Star Wars films.

There’s been a lot of flap on the interwebz recently regarding the digital recreation of Cushing (who died in ’94) as Grand Moff Tarkin for the next Star Wars episode.  Personally, I don’t see why they couldn’t just hire another gaunt older actor  – Richard Grant, Charles Dance, Patric Stewart, Hugh Laurie, or someone.